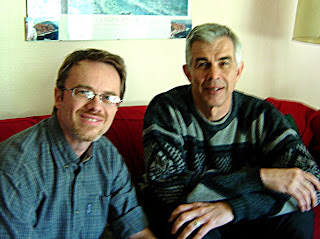 I first met Paul Anderson several years ago at an event for Pastors he was leading at North Heights Church, and I was impressed by his genuineness and warmth. Then earlier this year I learned that he had become involved in some kind of house church expression so I sought him out and we’ve had some wonderful conversations.

History
Some time in 2005, Paul had some young adult believers living in his home (in addition to his own family) as a result of his gift for hospitality. Some of these were people who had come home changed from service in Iraq, and had leadership gifts. They began to pray together and were drawn to an image of a spiritual “fire” starting in the Twin Cities, where their role was not to try and create a centralized bonfire around themselves, but rather to help start lots of fires in many locations. It was an uncomfortable image that stretched them to think about “going out,” so they began to think of their own gathering as a kind of training or Boot Camp for that work. As they talked about this with others, more people started to gather, typically young adults in their early 20s. Gatherings were monthly at first, but started becoming more frequent and over time became a weekly event. The group grew and grew and now typically has 50 to 60 people attending, packed into Paul’s home, sitting on stairs and so on.

Leadership
From the outset, Paul has resisted the temptation to lead or control the group. He serves primarily as a mentor, and meets with the people who are the de facto leaders just before the whole group gathers. The group actually talked about formally identifying leaders but decided against it, so the leadership circle is a fluid, porous group. In essence it is a self-selected group of servants. This avoidance of closed structures (my term) also showed up in a discussion of whether they should establish a website for the group. There was concern that defining the group might end up confining it. Paul sees this as a part of the move towards centered set identity (in contrast to bounded set) and you can see it reflected in some of the quotes below in my “Tidbits” section. (For more on bounded vs. centered see Frost and Hirsch p. 47, or go here for some nice visuals: http://www.3dff.com/php/viewtopic.php?t=386.) Paul does provide a little bit of structure, simply working to ensure that for any given gathering there is someone ready to lead the people that come. Though he is a resource to the active leaders, Paul only rarely acts as the teacher in the large group so as not to set up some kind of external (“professional”) standard that others will then think they have to live up to.

Gatherings
At about 6pm, Paul typically will meet with the leaders he is mentoring. During this time they may discuss broader issues related to the community, but the focus tends to be on preparing for the evening’s gathering. By 7 they turn to prayer, again, largely but not exclusively pointed towards the gathering which gets going at about 8:00. In the gathering there is usually about 30 minutes or so of worship led by 3 or 4 people who were in preparation since the 6:00 meeting. After that, someone will share “a word” with the group that can be teaching, exhortation, personal story etc. Occasionally someone from outside the group may speak here. After this, there is discussion in impromptu small groups focusing on what was just shared. At that point, people are invited either to stay in the room for open prayer or go out to the dining room for food, or move back and forth between both. People often linger for about 2 hours and sometimes return to Paul’s home in between gatherings.

Community
Paul uses the term communitas to describe the kind of relational network he is seeing, a term that is distinct from community. This is a concept I’m still new to, but I gather that it refers to a kind of bonding through challenging experiences – a “fellowship forged by fire” – and a shared life that extends beyond the times of group gathering. Frost and Hirsch have also written about this, notably Frost in Exiles.

Mission
I’m not well-informed here, but Paul did mention that the group has been active in supporting some of its members in short-term international mission trips to Thailand and Brazil. An ongoing connection to a Thai church is emerging. Although there is a desire for the gathering to be “here for the people who are not yet here,” Paul reports that he is seeing more discipleship of current believers taking place, as opposed to new believers being birthed.

A Few Tidbits:
● Personal sharing is common in the group time. People are eager and often ask; “When can I share?”

● Some have said; “This is more like church than church!”

● Some have asked; “Can I make this my church? Would that count?” Paul’s sense is that the majority of people involved still have a connection to another, traditional faith community. But for most, this gathering really is their primary faith community.
Posted by Feral Pastor 2 comments:

Everything but the House Church Kitchen Sink? 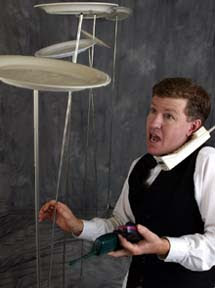 It's past time for a little personal update.

Since the beginning of November I've been working as a part time interim associate pastor at Gethsemane Lutheran Church in Maplewood, MN. I rather fell into this position since I wasn't really looking for a conventional church job. The pastor there is Rick White, a good friend of mine. He found himself short-handed after his FT associate pastor retired, and when it became clear that it was going to take some time to find the right person to hire he asked me if I could help out for a while as that process unfolded. For various reasons it was best to set that up as a formal interim position, expected to run for a year.

There have been a lot of great things for me in this situation. I'm glad to help Rick out and it's fun and easy to work together since we've known each other for a good many years. I've been very warmly received by the folks at Gethsemane and it's always a plus to be affirmed when I offer my gifts. I've been doing a fair amount of preaching - especially this month as Rick is out for three weeks recovering from shoulder surgery - and I do enjoy that. The interim position also helps me maintain my clerical standing as an ELCA pastor: once the interim is over I'll have another three years to figure out how to stay on the roster while working on HCs.

And I should say, getting a paycheck is a pretty big plus, too!

At the same time, it's presenting some challenges. My main desire is still to find a way to serve in the house church movement, and my work at Gethsemane takes up nearly all of my "free" time for that. Since Kisten is full time at Trinity, I'm taking the lead in parenting and homemaking these days, so "free time" is a pretty limited commodity. That's at least one reason why this will be just my fifth fresh blog thread since November. (If I'm not more diligent, people might get the wrong idea and think I've run out of things to say!)

On the other hand, I would not be at all surprised if the Lord found a way to leverage this part of my journey into my house church work so that it wouldn't end up as a delay or detour at all. I've known from the start that I want to nurture HCs that have meaningful links and partnership with larger church expressions - congregations and denominations, most notably. So I'll need to have a relationship myself with a congregation that wants to be a part of the venture. Perhaps that will open up for me with Gethsemane. Rick is one of my strongest personal supporters of what I'm hoping to do, and I've made no bones about it to people in the congregation that I'm not looking for a permanent, regular church job because of my interest in HCs. So it's a conversation that will be occurring naturally.

So, as a parent, spouse, PT pastor, PT caterer, and would be blogger and HC explorer I do feel like I'm back in my plate-spinning mode sometimes. But as I recently said on my Facebook page: "Tim is living a good life!"

I thank God for that!

Tim
(P.S. - The plate-spinner in the image above is a real guy named John Park who apparently does this for a living - keynotes, tradeshows etc. Need someone for an event????)
Posted by Feral Pastor 2 comments: