I was very pleased to receive a copy of The Message 100 by Eugene Peterson for review a while back.  I'm happy to recommend it, first and foremost because The Message version itself is hugely beneficial for reading, and second because the new arrangement of the books of the Bible that you find in The Message 100 has some valuable features as well.

A quick word about the translation itself. I like to refer to Peterson's excellent work as a "rendering" of scripture. Though based on the original language manuscripts, Peterson allows more freedom in bringing it into English than one would use in a formal translation. His rendering is at least a paraphrase, and at times makes moves that I would have to call interpretations. But the vitality and vibrancy of his version is so helpful in "hearing" scripture that I am always enthusiastic to recommend it to people for general reading and as a companion for formal Bible study. Reading The Message has improved my "scholarly" understanding of scripture, but more importantly, helped the Lord shape my heart in wonderful ways.

This new version makes two significant changes in how a reading Bible is organized. First, it divides the text into 100 readings. That simple change gives you an encouragement to read the whole Bible (who doesn't want to get to 100?) while at the same time avoiding the problems associated with so many other "read through the Bible" plans which is simply this: failure. I don't know how many times have I gotten behind in some daily reading plan and faced the decision to either skip a batch of readings and "press reset" to (FAIL!) or binge-read as fast as possible in order to "catch up" (faking success = FAIL!)  The 100 version invites you to keep at it and take your time. It's a grace goal... one that comes with a finish line but without a deadline.  How cool is that?

The second change in the 100 version is more significant, and more subtle.  In many places, the books of the Bible have been re-ordered.

Finally, Acts follows Luke as the sequel it was written to be! But that's just the start...

Anyone who's ever tried to read the Bible "cover to cover" has run into the Kings-Chronicles issue. You work your way through 1st and 2nd Kings and then here comes 1st and 2nd Chronicles going back over the same territory you just finished. It's confusing and a bit frustrating to feel like you are "re-reading" all that stuff, even if you are aware of the significant differences between Kings and Chronicles.  Some reading plans deal with this by interweaving the two tellings, and that helps especially if you read the various Prophets along the same timeline as well. (Wayne Cordeiro does an excellent job of this in his Life Journal materials.) In The Message 100, Peterson leads you through Kings first, and then introduces Chronicles after you've gone through much of the prophetic literature and spent time in Exile with Daniel. That brings you to the point in the story when the Chronicles were written as a way to re-engage the people's history in a new situation. That one change actually gave me a new appreciation for the first eight, tedious, chapters of genealogy in Chronicles. (Actually, not so much a "new" appreciation as a "first ever" one.) After all they've been through and the ruin they brought on themselves as a people, the listing of ancestors up to the present survivors returning from exile has a way of saying "... and we are still here!  After all this, all these generations, we are still here!"  The placing of Chronicles helped me to catch that.

Another notable re-ordering is placing the Gospel of John in a final section along with the letters of John and Revelation. With the similarity of voice and vision in these books, it's intriguing to think about the way that reading them together will cast light on each of them.

I'm also intrigued by the decision to put Job in between Genesis and Exodus as part of the section on "Beginnings." No explanation is offered, but to me it helps to suggest a similarity in genre of the two books as something different from what we moderns think of as "history."  And I think it also works as a way of "setting the stage" for the story of Scripture as both Genesis and Job get us thinking about the challenge we face in the human condition.

Each of the 100 readings has an introduction written by Peterson.  They are very helpful in keeping you oriented towards what's going on and what the readings are pointing towards. Especially here in these introductions can you hear the voice of Peterson the pastor, and some of the material is even drawn from his sermons. Another great gift he offers us.

The one thing I wish for that's not in the book is some commentary on his decisions for re-ordering the books of the Bible. But aside from that it's another wonderful piece of work from a man who has made a great contribution to the faith and life of many people, myself included.

Fellow blogger and ELCA Pastor/rabble-rouser Clint Schnekloth invited folks to offer a year in review blog post and offered to compile them on his own blog so here goes!

The Church Isn't Dying, It's Just That The Bubble Has Finally Burst (The end of inflation.)

(Church) Life Can Be Different (Imagine one service per month?)

Maybe the "dones" are done with the "form" of church we offer them.  (Walking away can also be walking towards.)

Is the Kingdom of God a Gated Community? (No key to the Pearly Gates?)

And a perennial favorite from years ago that still gets traffic...

Luther on House Churches (It's time we acted on his proposal.)

Email ThisBlogThis!Share to TwitterShare to FacebookShare to Pinterest
Topic Threads: My Life

The Church Isn't Dying, It's Just That The Bubble Has Finally Burst 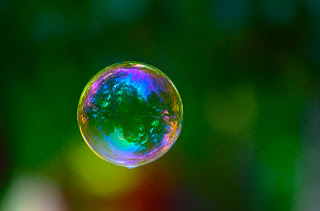 I was talking to a family member about what "the end of Christendom" means and came up with an analogy I thought would be good to share.
After the burst of the housing bubble and the great recession, I think the whole "bubble" idea is pretty familiar to folks. You have something - like home prices - that has a normal, reasonable level but then gets super-inflated way beyond that point by other stuff. So when the "other stuff" gets removed, the bubble bursts and things drop back to where they would have been all along. What makes this tough is that the "inflating" process can go on for a long time and people get used to it, expecting it to go on, but the "burst" is sudden and wreaks havoc on things.
Similarly, the Christian church has been inflated - arguably for about 17 centuries - because the culture has "pumped people into it" in various ways. But now we are experiencing the burst of that bubble and while it's pretty traumatic and sudden (by historical standards) it's not really the case that the church is "dying" any more than the housing market died. Rather, it's simply returning to something more in line with what it would have been *without the cultural subsidy to inflate it.*
Posted by Feral Pastor No comments: