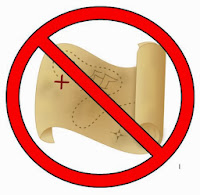 I want to start collecting some of the metaphors and visuals that I keep returning to and thought I'd start with Asteroid Field Navigation. I touched on this briefly once before in the context of making "mistakes" but thought I'd brush it off and represent it.

Asteroid Field Navigation
Back in the days of Lewis and Clark they could spend a few years making a map, hand it over to you, and it would still work because all the mountains and rivers were right where they left them. In our world, the terrain itself is unstable, and it's better still to go the next step and just acknowledge that there is no terrain period. Instead, we travel and navigate in an asteroid field where everything is in motion, including us.  If you try to make a map, you won't succeed because by the time it's done, it's obsolete, and you've probably been hit by an asteroid in the mean time anyway.

But navigation is still possible. They way you do it is by constant course correction in a three step process.

First, orient yourself by quickly getting sufficient clarity about where you are and where you are going. "Where you are" includes getting a bead on the rocks in motion around you, especially those on a collision course.

Second, move. Take some action that avoids catastrophe, utilizes immediate opportunity and moves you in the direction of the destination even if it's not a straight-line course. (Fellow geeks will enjoy visualizing this with vectors.)

Finally, now that you have initiated movement, your whole context has shifted. So go back to step one and start over. Orient, Act, Repeat.

Contradictory Theologies as a Guard Against Intellectual Idolatry.

I pursue a practice of daily devotions and journaling using the SOAP format, which I highly recommend.  Of late, I've begun posting photos of my journal entries as an easy way of sharing my life with others that are my travelling partners in the faith.  (Much easier than re-typing everything!)  So below is a photo of my entry for today.  It's a reminder that faith is about trusting a person, not confidence in a particular way of thinking about Him. 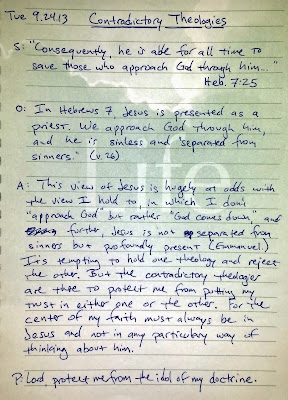 Baptism as a Binding of God - Metaphor from Adoption 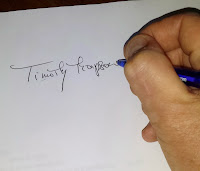 Talking about baptism has a tendency to start fights among Christians, but I gave in to the urge to offer a key metaphor for me in a post on another blog so I thought I'd let folks here have a look too.
"Maybe the significance of baptism isn't in what it "does to" the baptized, but in what it "does to God." Perhaps baptism is a way God has empowered us to "bind God" to the person being baptized in a way that has eternal, spiritual significance.

For a metaphor, consider this. I traveled to Vietnam years ago, empowered by my wife to legally bind her (and me) to a child through my own signature on her behalf. Signing my name is a routine and frequently meaningless act, but in this context, it had huge, real and lasting significance for me, my wife and the child. (Her name is Amy.) In the same way, washing with water is usually not very meaningful, but in the context of baptism that act could have real significance.

The metaphor could be extended to address some of the other struggles around baptism. Suppose my wife and I had made a personal commitment to provide in every way possible for the welfare of the child *regardless of whether the formal adoption was allowed to go through.* Our ability to deliver everything our hearts desired to Amy might have been hindered if the formalities couldn't be enacted... (it wold have been pretty hard to get her out of the country and situated with American citizenship, for example!) Who knows, maybe we would have ended up finding it necessary to "move into the neighborhood" (See John 1:14 the Message) and become citizens of Vietnam in order to follow our hearts and care for the child we had *unilaterally* claimed as our own. When you use this metaphor as a lens, you can see nicely that the underlying commitment is the real thing, the main thing, but it's also helpful to have the formalities enacted since that 1) makes the commitment public to all and 2) makes it much easier for the blessings of the relationship to flow to the child."
Posted by Feral Pastor 1 comment:

Celebrity Endorsement of The Feral Pastor

I am thrilled to announce that the Feral Pastor Facebook Page has just been "liked" by none other than KVB Luther!

Truly, if I had bothered to create a bucket list, this would surely have been on it.
Posted by Feral Pastor No comments: