Leaning into Transformation in the "Experience Economy"

My friend Rich Melheim posted the following comment about The Experience Economy, a book aimed at secular marketing and business:
"SUMMER READING: In "The Experience Economy" (the only business book I've seen dedicated to the "author and perfector of our faith") the book starts with a value graph, showing that people don't value commodities, goods, or services much any more. We value experiences. By the end of the book, we see that experience isn't even the top value. The top value is transformation. That puts your "service" in the center of things people no longer value. When I say "forget the IHS" (one hour service), I mean the one-way show you put on for people. It has little value any more. Get EPIC (experiential, participatory, image driven, conversational) a la Leonard Sweet."

I've written before about the limited bang for the buck in Sunday morning worship, and affirmed but challenged the relative value we put on large vs. small gatherings in the first blog post I ever wrote, using the food pyramid as a metaphor.   But radical realignment is an unlikely challenge for a congregation to take on.

Even so, we can use this to frame our thinking.  For conventional-model congregations (i.e. programs, property, professionals and presentational worship), how can you clearly and effectively leverage *each* of those four aspects of your life towards transformation?

And for my friends in 3dm and related movements, (house church, Life Transformation Groups etc.) here's yet another confirmation of your instinct to set aside most of the apparatus of conventional church so that life-on-life can really be your focus.  That is, I'm convinced, where the most fertile soil is for transformation.
Posted by Feral Pastor No comments:

A friend in a Facebook clergy forum was wondering how an established church might be able to participate in some of the "new things" going on missionally without abandoning wholesale the forms and expressions that have fed and continue to feed those who have been there for a while. Here's what I shared on that:

"Awesome question! What it might look like, I think, will depend first of all on the economics of your current congregation. If they are, like most, working hard just to keep the doors open then a both/and scenario is going to be really hard to envision. If I can assume that you're not in survival mode, then here are a couple of ideas that might at least be good for stirring the pot:

1. Provide financial support to a "home front missionary." Most people get the idea of a missionary as someone you give $$$ to, who then goes somewhere far away (where there are reported to be some non-Christians) and once in a while reports back. The missionary does not preach or teach at your church (except maybe once a year) and the people that join his/her congregation do not help pay your bills. Leverage this idea to support a missionary to the people who are *culturally* distant in your area, but with *no* expectation that the will join your church. The missionary then has freedom to help the evangelized to develop a non-conventional form of congregational life that fits their culture and is both reproducible and financially sustainable. (For more on this, check out this old blog post of mine.)

2. Release a batch of folks from your current congregation to be a "missionary band" and support them in inventing a new mode of congregational life. Be sure they take their offerings with them!

3. Offer an alternative confirmation track for those who are interested in being "missionaries to the future." Train these young people to function like the missionary band in #2 and hugely empower and encourage them to take ownership of the formation and leadership of their own congregation. (Confirmation as mission developer training. This will have some very salutary effects on the design and content of your confirmation program, I think.)"
Posted by Feral Pastor No comments:

Jesus, Orpheus, and Evangelism by Beauty

I've always been troubled by evangelism that needs to make people afraid of something so they will flee to Jesus.  Isn't it possible to present something that's inherently more desirable in the first place?  So I was delighted to discover a piece of Greek mythology I'd never heard before that expresses that idea.  It's the story of Orpheus and the Sirens.

To back up a bit... The Sirens were creatures who sang so beautifully that the sailors who heard their song could not resist going towards it.  They would throw themselves into the sea and perish on the rocks around the Sirens' island.  I knew the story of how Odysseus found a way to hear the song and survive: he had his crew lash him to a mast and plug their own ears with wax before sailing by.  Crafty one, that Odysseus.  But I had never heard there was another who got his crew past this peril as well.  It's a story of Orpheus who sailed with Jason and his Argonauts.

Orpheus was the greatest of musicians and had been invited to sail with Jason for just this situation.  As they approached the island of the Sirens, Orpheus began to to sing and play on his lyre, and his song was more enchanting that that of the Sirens, so the crew stayed with him and sailed past to safety.

To me, that's the image of evangelism I want to strive for.  To "sing a better song" that people would find even more compelling than whatever other songs have captured their hearts before.  Or better yet, casting Jesus as the Orpheus character, to introduce people to the Singer Himself. 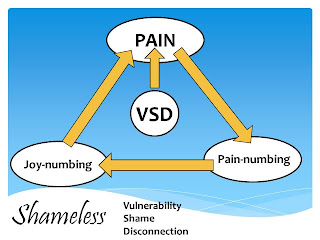 In the fourth and final message in my Shameless series, we look at the ripple effects of a disconnected life and the ways we try to numb the pain, which leads to more pain, which leads to more numbing.  We revisit the central message of the series, which is how God goes past the symptoms on the outside and deals with the VSD at the center of our hearts.  From there, the series winds up with a call to share what we have found with others as "Ambassadors for Christ."  All this, and Heinz 57 steak sauce as well!


Sermon from June 30th, 2013 from Gethsemane on Vimeo.
Posted by Feral Pastor No comments:

Anne Lamott Nails It for the Shame Series

This Facebook post from Anne Lamott is so perfect for the whole series I've been doing on shame and the struggle to achieve our own good-enoughness. Anne Lamott.... broken AND beautiful, just like all the rest of us!

Last week, when I was having the experience that almost every writer longs for, I got as mental and confused and low self-esteem as I've been in a while. And everyone I was with was extremely sweet, smart and affirming. It was the damn system that failed, the system I was raised believing in, that I can achieve and impress and people-please SO successfully, that I will finally get the seal of approval sufficient to fill the Swiss cheesey holes in my soul. I will have arrived, finally. YayDuring this pretty high-falutin' experience under the bright lights, w/ kind smart people and FABULOUS make-up, I felt like I'd 9 cups of coffee, two bags of candy corn, a box of chocolate truffles-- Heaven, right? I love being out of my body, tripping on my own fabulousness, mood-altered to within an inch of my life. And then guess what happened? You're going to hate thisIt ended. Yes! My turn was over. All the smart kind people--and even my make-up person--TRAITOR!--went on to the next person. And then there was just me, even more needy, worried, and self-doubting than usual--had I talked too much? Too fast? I had meant to sound like a cross between Gloria Steinem and Ram Dass--but had just sounded like a very caffeinated ME. Regular old human me, beautiful, slightly nuts, flawed. Trying to tell my truth about God and being human, in my own voice.Sigh. Then I flew home, to my dogs, my life, my writing, church, etc, and I drank a lot of water, and my friends loved me out of ALL sense of proportion, and I got to do the sacraments that save me--plop and putter. Reading to my grandson. Radical self-care--lots of rest, Wimbledon, salads, rubbing lotion into my fabulous jiggly thighs. Eating delicious low-sugar life-giving foods, with perhaps an excess of cherries and peaches. Okay, and plums. And that one night w/some See's. Getting a little writing done EVERY day, by pre-arrangement with myself, as a debt of honor. Teaching my Sunday school kids, that they are loved and chosen, safe beyond all understanding, and that to be alive in a miracle. Home! In my funny gorgeous dumb puttery life! Sweeping the kitchen, singing along with the Beatles. Hallelujah, and wow, and thank you thank you thank you.