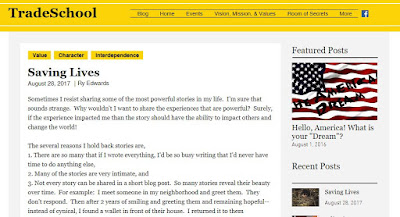 Today I just want to lift up a really important post from my friend Ry Edwards. He tells the most amazing story of how "routine" contacts in everyday life with service people can be so important. I absolutely believe this is part of what it looks like to see the prayer "Your Kingdom come!" answered in people's lives.

Please, take a few minutes and read his story.

And for my part, I just want to add that when I think of the kind of faith community I long to see and hope to foster, it's one where people get together every week to eat, laugh, pray, play, and tell each other stories like this from their own lives so that we all grow to live like this more and more.

The "Unchurching" Comic Book and the Unfinished Business of the Reformation

Friends - I've been mulling recently about what I consider to be the "unfinished business" of the Reformation as we are in the midst of the 500th anniversary of all that getting going. To me, the unfinished business is the empowerment of the "laity," which is the churchy word for "everyone who's not a clergyperson."

Luther himself proposed a bold move for that, but never launched it, and I've written about that on this blog before. That may be the most important post on this blog, come to think of it.

In the mean time, I want to lift up for you the work of Richard Jacbson who's written a really engaging book called "Unchurching: Christianity without Churchianity." There's a Facebook group and podcast around that now, and the latest incarnation is a comic book version that the focus of a Kickstarter campaign featured below.

I encourage you to take a look, and consider supporting this work! I for one believe it is past time for us to be asking better questions and launching bolder experiments in how we follow Jesus and bless the world. I salute Richard for being a part of that work.