Adult Baptisms per 100 People in Worship

In connection with my previous post on helping congregations learn from each other about doing evangelism, my friend Ron Amundson was struck by the chart below that is included in the background section of the discussion site.  So I thought I might lift it up here as well.

The chart shows the number of adult baptisms per year per 100 people in worship in a (non-representative) sample of 27 of the 107 ELCA congregations in the Saint Paul Area Synod.  (Since most of them are less than one per year on this measure, the data was actually produced by averaging worship and baptism statistics for the six-year period of 2000 through 2005.  This kind of data is publicly available, by the way, on the ELCA website. Once you find the congregation you are interested in, look for the "Full Trend Report" link for a wealth of information.) 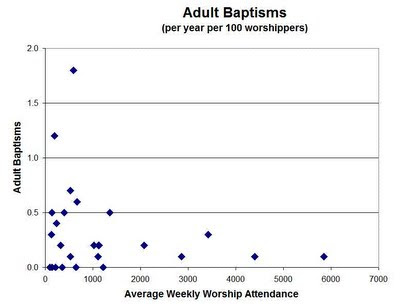 A couple of things to note:


So.  More food for thought.
Posted by Feral Pastor 2 comments:

This post is a bit of inside baseball/local interest mostly for my fellow Lutherans in the Saint Paul Area Synod. It's about a resolution I wrote for our upcoming Synod Assembly about evangelism.

In a nutshell, it's about discovering which congregations are being more effective among us and drawing out stories from them that the rest of us can learn from.

To get this Resolution to the Synod Assembly, I brought it first to my Conference Assembly where it passed - but just barely, which was a surprise to me.

Next it was reviewed by the Synod's Reference and Counsel Committee which also had reservations and is recommending that the Synod Assembly not vote on it but rather have a discussion of evangelism at tables at the Assembly.

Well, there are 17 days left before the assembly and I'd still like to see this thing passed so I set up a little website where people can read and discuss it. It's public so anyone who wants to can join in. You can find it here at Learning to Evangelize.

We now return to our regular programming.
Posted by Feral Pastor No comments: