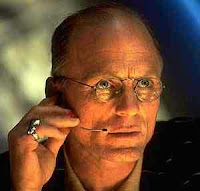 My friend Jonathan posted an interesting question on Facebook yesterday:

Curious: Christian? Why? Or... Non-Christian? Why? Would love to hear your answers. Don't try to convince anyone of anything. Not a debate. Just interested in YOUR response, your story, your heart.

I've though a bit about that over the years, and more so recently, so I wrote a reply which I thought I'd share here too:

Christian. To be quite frank about it, I am a believer because my parents raised me in belief. As Christof says in The Truman Show; "We accept the reality with which we are presented."

More to the point, though - why do I continue to believe? As I have looked at that, two reasons are the most influential.

First, I have an actual sense of the presence of an Other, that resonates with the God of the Bible as seen in the person of Jesus.

Second, the whole belief system that is grounded in my relationship to that Other is something that I find comforting, inspiring, intellectually and emotionally compelling, and integral to my sense of living a life that has meaning.

I guess that's the short answer. ;)

As Jonathan, I'm also curious to hear from others. Why do you believe what you believe?
Posted by Feral Pastor

I was a raised as a secular atheist by parents who rebelled against the senseless and empty rituals of Conservative/Orthodox Judaism. Atheism was my religion. That changed when I started reading the bible on my own, starting with Revelation. I didn't get past Revelation 3 before I heard Christ at the front door and let him. I am now at rest in Christ, certain of my destiny, and at peace with God. Intellectually, I find Christianity rich and fulfilling. The academically smartest people I know are Christians. It's a great way to explore one's self and live life. It is truly The Way.

Hey Charles - how did you end up reading Revelation first? I'm thinking there must be a story behind that!

I originally believed, but did not know it at the time, because I was baptized with the Spirit as a yellow jaundice baby fighting for life in an incubator. I then believed because I was blessed with a mother from whom I could not get the song, "Jesus loves me this I know, for the Bible tells be so.." out of my head. Outgrowing my child-like faith from age 11-18 to a much higher level of "maturity", I believed because girls I really liked believed and older teens on my church youth softball team drove nice cars and shared their beer. I put my beliefs on a shelf from age 19-26 so that I could be free to explore all that requires only desire, not faith. This ended in the lowest point in my life. This marked the beginning of a simple prayer that transformed that brokeness into a simple spiritual journey filled with countless foot prints that are not my own which carry me by Grace that I might believe, why? Because I am blessed to be a blessing and have my one true love in one faith and one Lord.